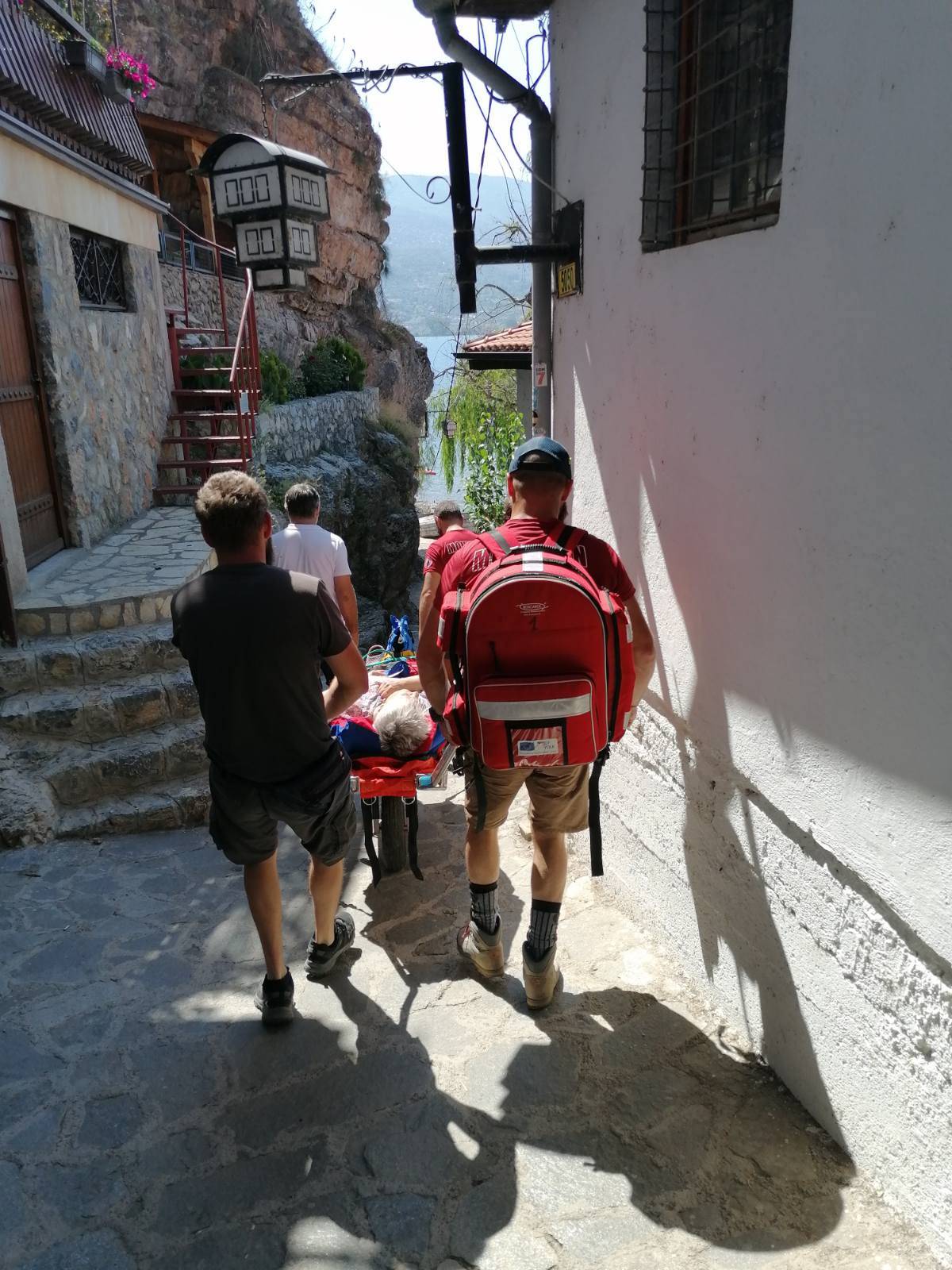 This morning, at 9:25 a.m. a colleague from MRS who lives in Kaneo, asked for assistance, for immobilization and transport of a neighbor who, while doing her daily work at home, fell and suffered a severe fracture of the lower leg. The MRS team arrived at the scene in 13 min. It carried out complete immobilization of the injured limb with the help of a modern vacuum aid, as well as additional immobilization of the entire body of the injured woman, in order to safely transport her along the steep and narrow streets in the settlement. After immobilization, the injured woman was carried to the church of St. Sofia, and transported to the Special Hospital for Orthopedics and Traumatology St. Erasmus, for further medical treatment with an MRS vehicle.

For the second time this year, the MRS assists the citizens and health services in safely evacuating injured residents from Kaneo, because the conventional methods of the other services are simply inapplicable.

These cases, fortunately with non-life-threatening injuries, once again raise the alarm about the necessity of acquiring specialized vessels, which will significantly increase the efficiency of rescue teams, in hard-to-reach lakeside settlements and tourist sites.

We wish the lady a speedy recovery, and we advise the residents of Kaneo settlement and all the citizens of the region to contact us promptly on our SOS line 13-112, whenever they need our help. 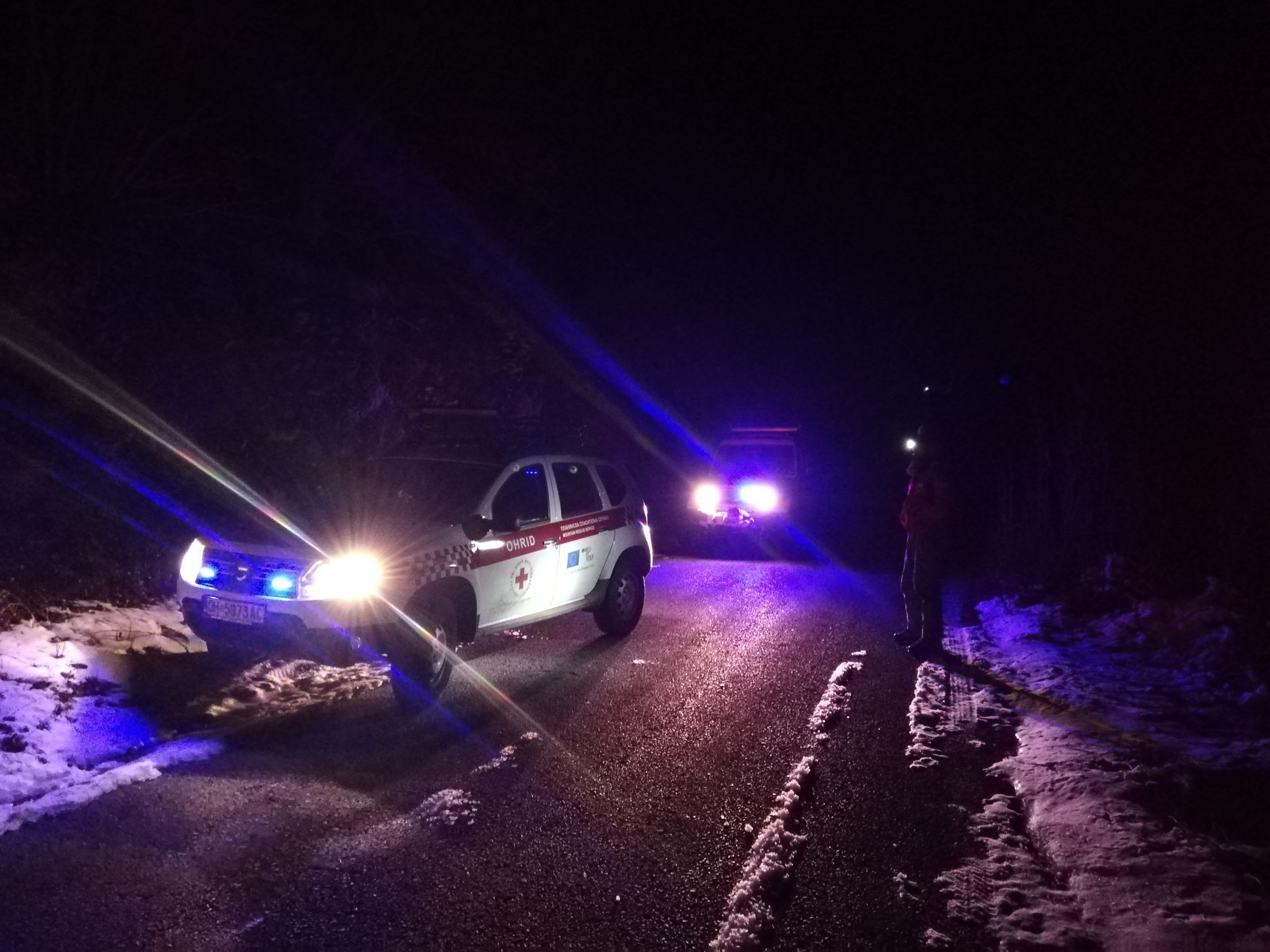 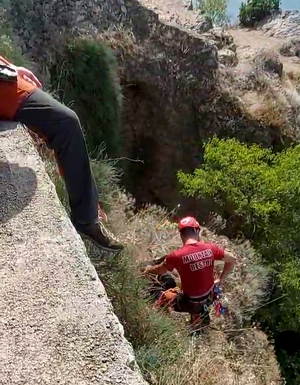 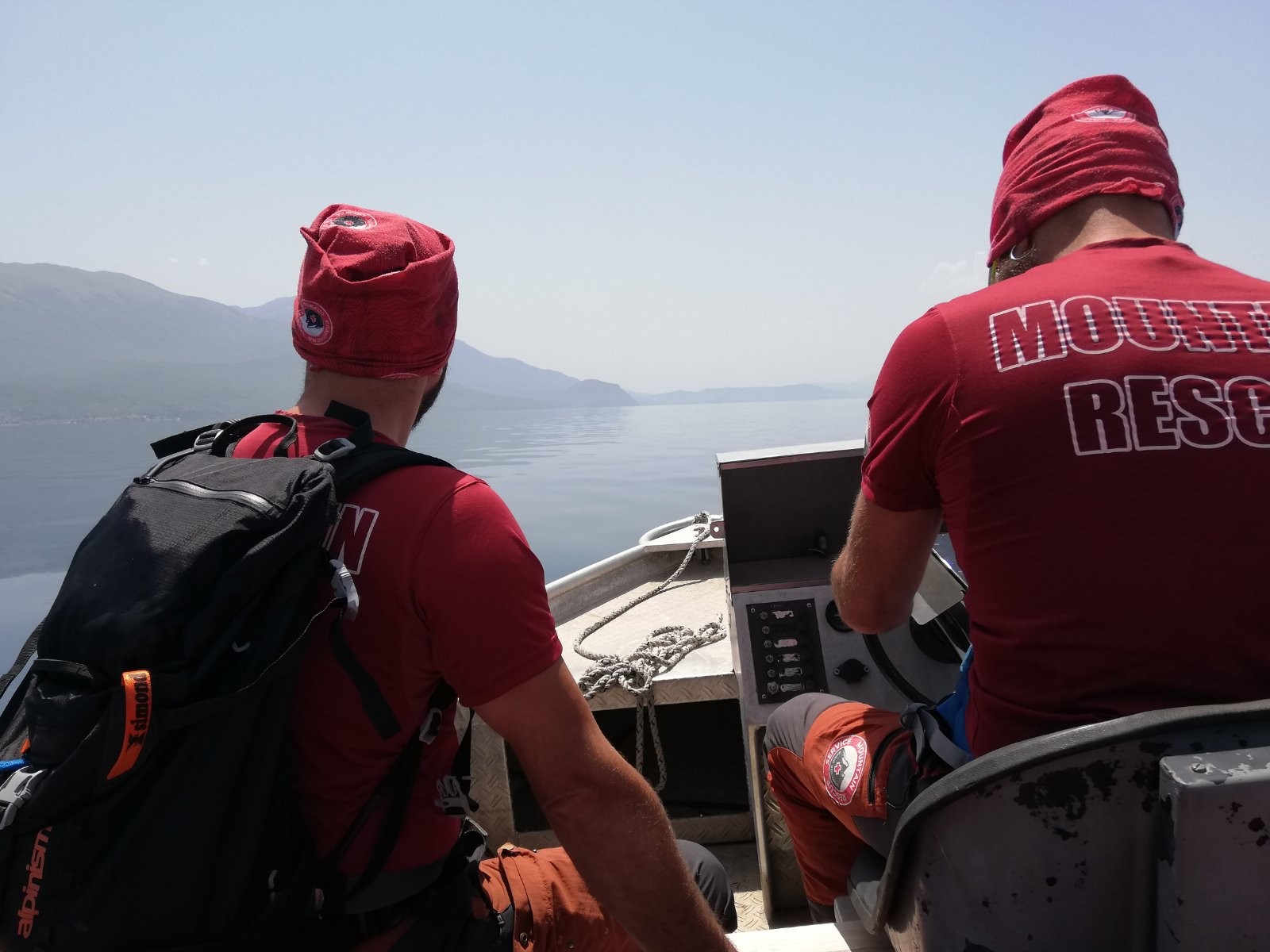 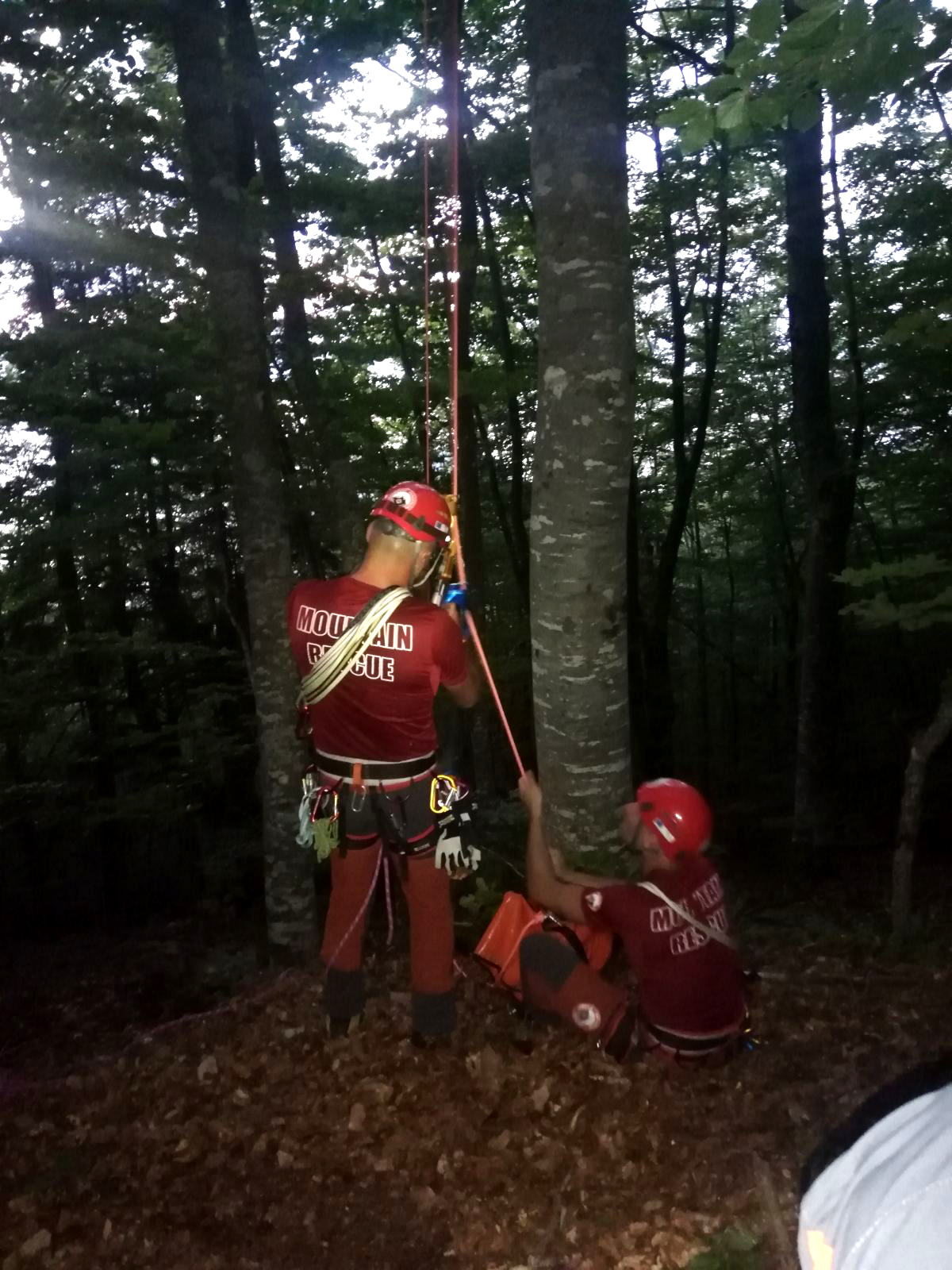 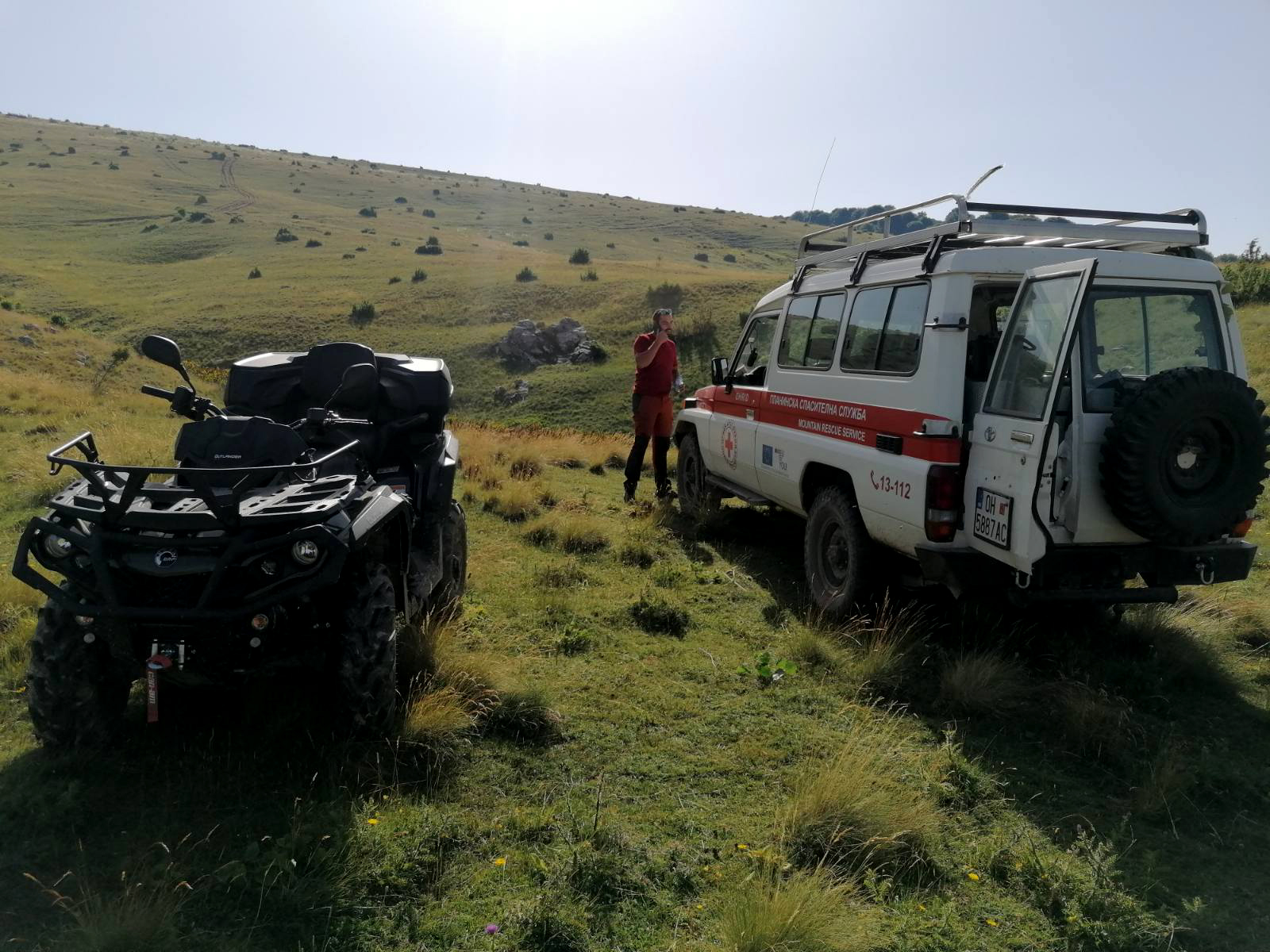 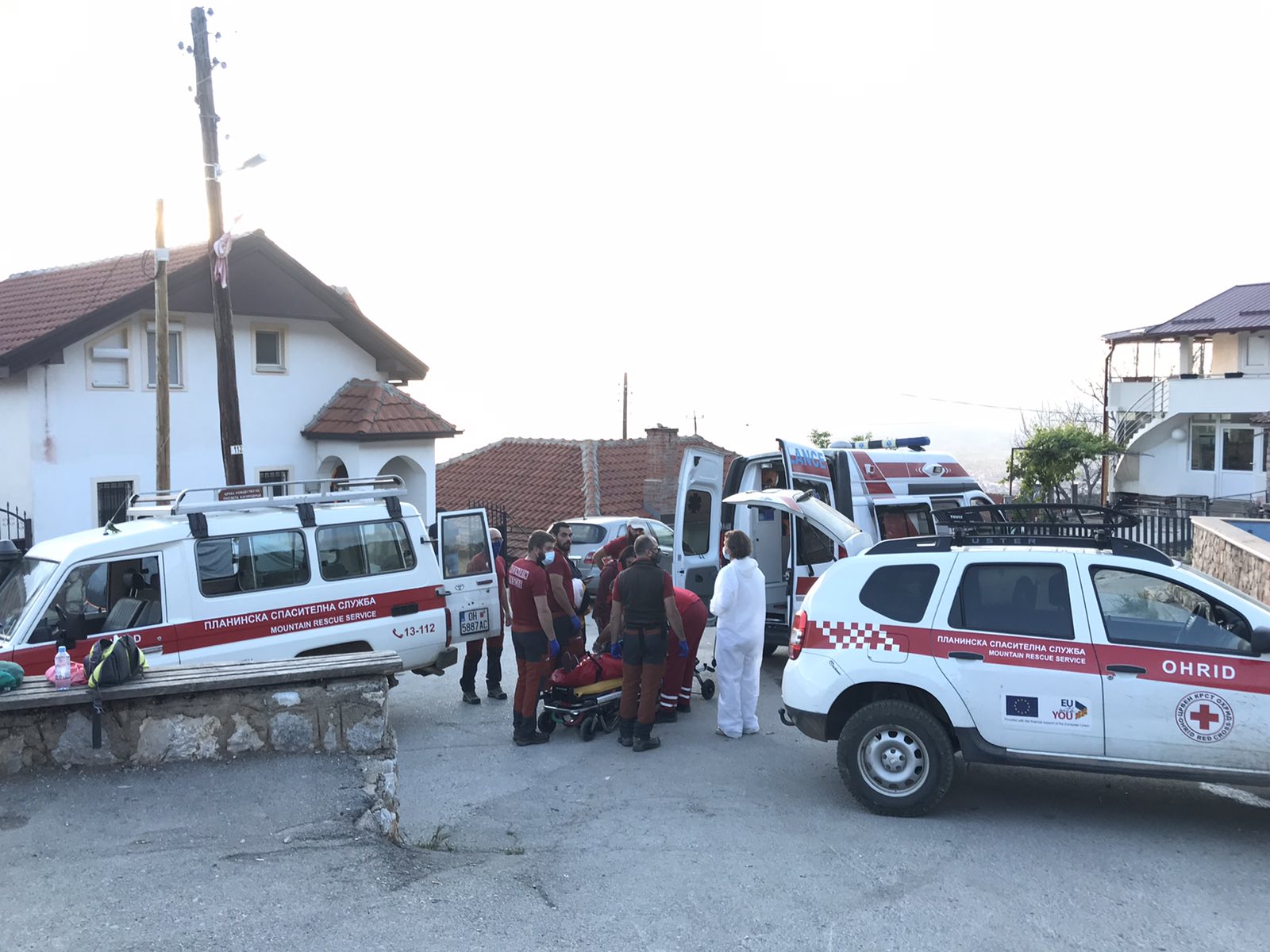 Today at 6:05 p.m., the Ohrid Emergency Medical Service alerted the Operational center of the Ohrid Red Cross Mountain Rescue Service for an accident caused by a fall of an ATV. Considering that the accident took place on a dirt mountain road, about 10km away from the nearest asphalt road, the MRS was called to intervene. Two teams were immediately mobilized. They headed to the scene of the accident with two off-road vehicles, where two people, foreign nationals, were given first aid. The injured were properly immobilized and ready for transport, after which they were handed over to the Emergency Medical Service at 7:10 p.m., which transferred them to the special hospital for orthopedics and traumatology St. Erasmus, for further medical treatment.

This intervention, the second of its kind, which took place just before the start of the tourist season, once again emphasizes the need for a serious approach in the organization of the risk management system, in order to ensure a quality offer, as well as effective action in case of accidents which inevitably occur in adventure tourism. The Ohrid Red Cross Mountain Rescue Service, as an important part of the risk management system, in 2018 and 2019, with financial support from the EU, organized several workshops for adventure tourism service providers, which are obviously necessary to be held regularly, at least once a year, before the start of the tourist season, as an integral part of preventive activities. Also, a special Manual for Risk Management in Adventure Tourism was published (available online at the following link: https://pss.org.mk/en/za-nas/).

All this, as well as the high costs generated during the rescue operations, are part of our demands for the local governments in the region to be involved in the financial sustainability of the MRS, which unfortunately was not understood by the MPs. A large number of interventions and assists since the beginning of the year, 32 so far, amplify the alarm for sustainability, which forces us to think about the introduction of a price list for services, which, unfortunately, will be borne for the citizens in the future, who despite being taxpayers in the country, will still have to pay the costs for the efficient operation of the Mountain Rescue Service. 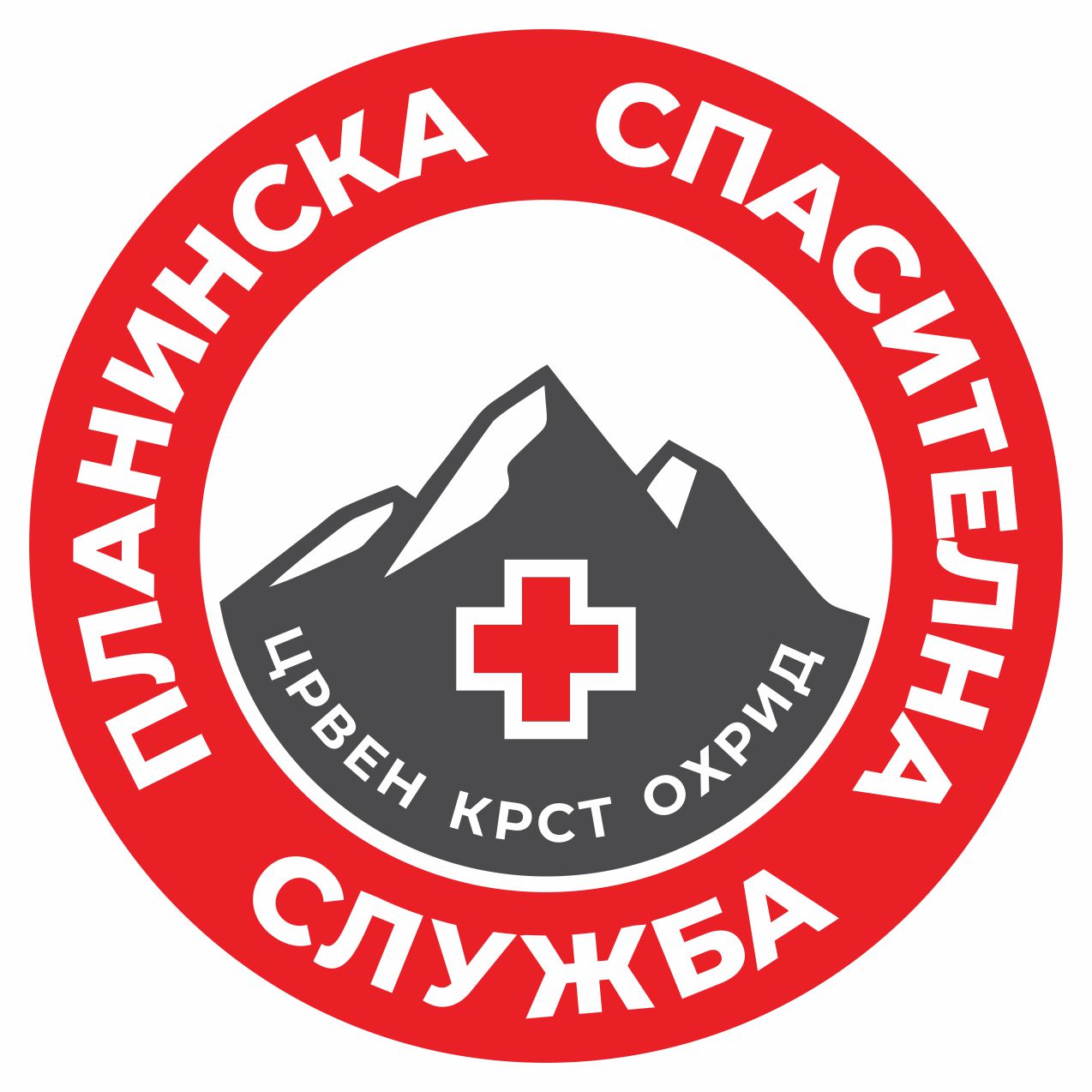 According to our statistics, the MRS receives several SOS calls for lost or injured berry pickers, in the period of May-June. We received such a call today at 5:15 p.m. from citizens, who reported that their relative due to the storm that hit the region this afternoon was disoriented on the mountain and in hypothermia. Fortunately, the person had a full battery on his mobile phone and access to the mobile network almost throughout the operation and was in constant contact with the Operational Center, who gave him instructions and tried to locate him. In parallel, a seven-member team of MRS with an off-road vehicle headed to the high parts of the mountain, in order not to waste time from the location to the possible interception of the person.

After receiving the call, the Operational Center informed the police, who also went to the field with a patrol. After a short time, the person informed that he came to a wide dirt road.  In communication with the team, it was decided to move down the road, which according to the description should go down to the village of Velgoshti. Later that was confirmed and at 07:17 pm, the person went out on asphalt road, where he was greeted by the patrol of the SIA Ohrid.

The most common causes for straying and injuring among berry pickers are unstable meteorological conditions, poor readiness, and equipment, as well as the underestimation of mountains. Therefore, we appeal to special attention, regular monitoring of meteorological forecasts, movement in groups of at least two people, proper equipment, carrying sufficient amounts of food and fluids, as well as mobile phones with full batteries. In case of any accidents, it is of great importance to quickly and timely alert the MRS, to prevent further complications of the situation. 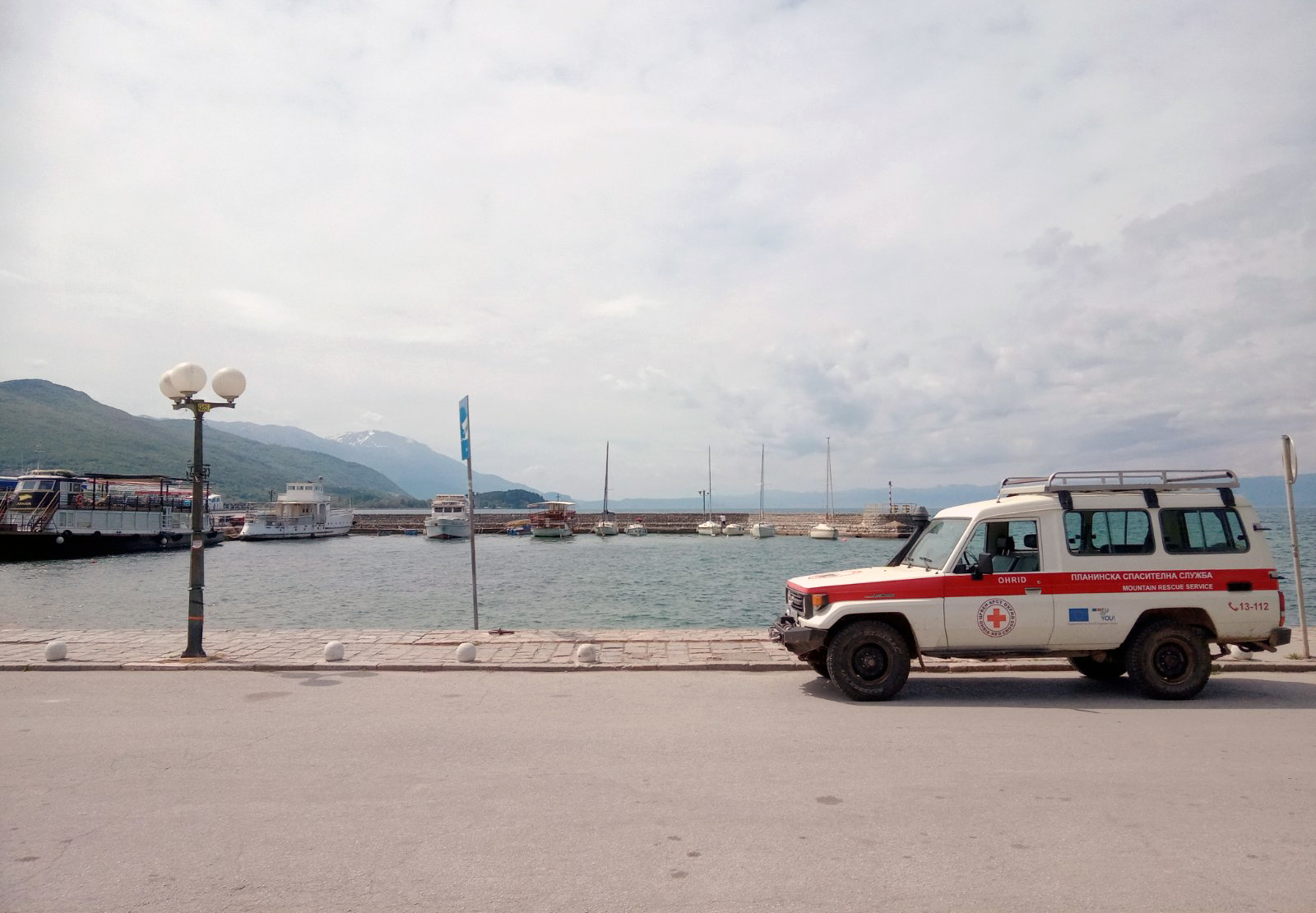 Today, in the early morning hours, we assisted the Ohrid sailing community in lowering vessels in the Ohrid Lake. For years, they’re facing an absurd problem due to the lack of a modern marina for storing their vessels, called lake pearls. They are forced to keep them in the fields, few kilometers away from the lake, lifting and lowering them every following season.

As promoters of sustainable tourism and the struggle to preserve the environment for future generations, we share the same fate with sailors. Sharing their strong enthusiasm, we actively joined in their efforts and struggle for as many sailboats as possible in Lake Ohrid, instead of petrol vessels.

Besides enthusiasm, another common thing we have with the sailors is the lack of support by the local and state authorities, which even more motivates us to support and help each other.

Again, we are at disposal of all nature lovers and promoters of environmentally sustainable forms of tourism in our city. As before, we will continue, within our capabilities, to help such activities for free.

Always here for Ohrid and the people of Ohrid, 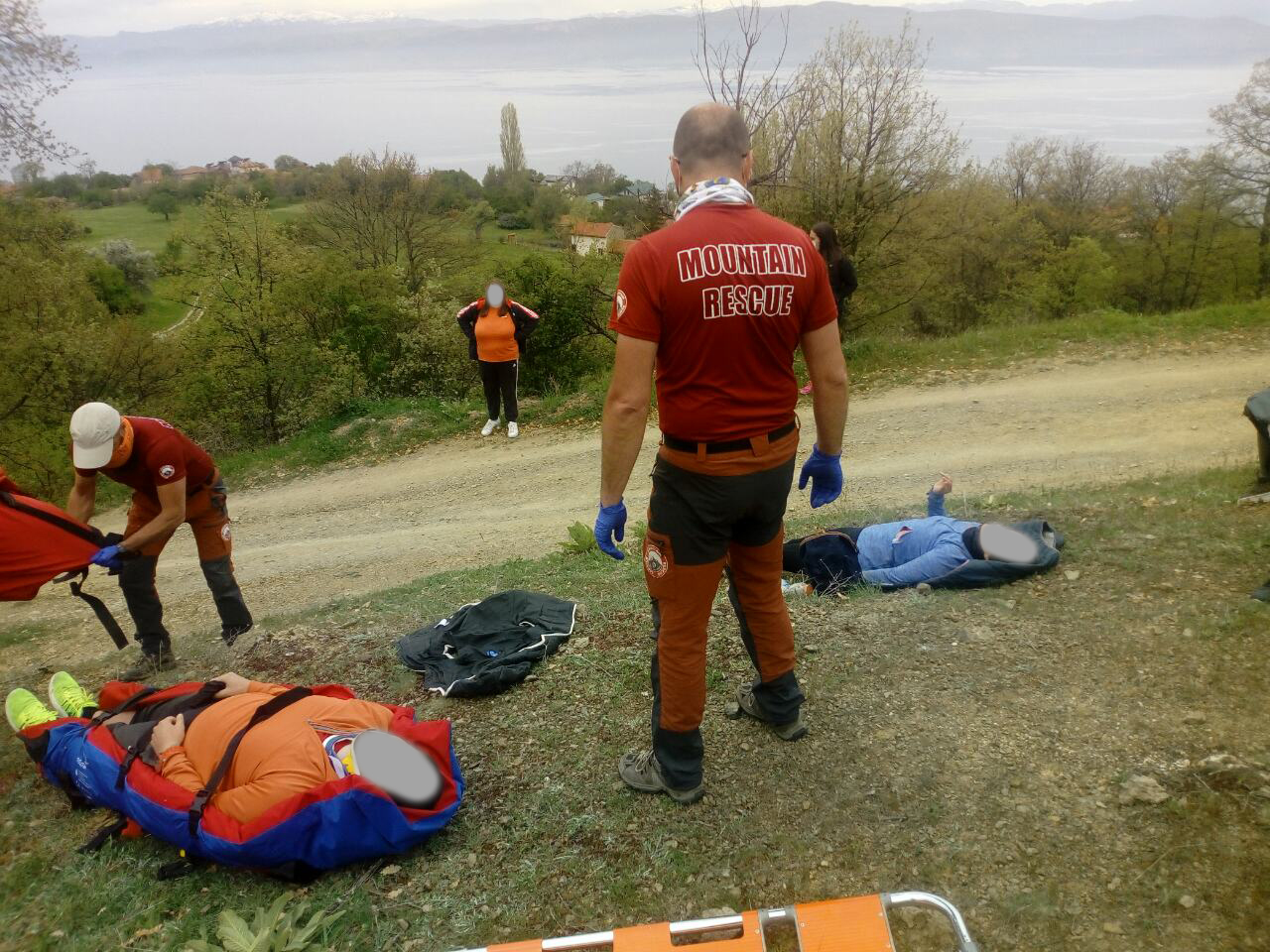 Today at 11:15 a.m. a group of domestic tourists, having an adventurous off-road tour with ATVs, alerted the Mountain Rescue Service operational center for an ATV accident, in which two passengers veered off the road and overturned in a ravine ten meters deep. A team of the MRS went immediately to the field, and the operational center alerted the Internal Affairs Department in Ohrid and the Emergency Medical Service. At 11:30 a.m. the team arrived at the scene of accident. To the two injured persons (male and female), both with polytraumas, first aid according to the protocol for this type of intervention was provided. Both were immobilized and transported by an off-road mountain rescue vehicle to the ambulance vehicle that was waiting at the nearest access point. At 12:10 p.m. the two injured persons were handed over to the EMS and transferred to further hospital treatment.

We like to use this opportunity to appeal to the tourist workers and the users of tourist services in adventure tourism, to respect and strictly adhere to the safety rules, and in case of an accident, especially of this kind with polytraumas with possibly serious consequences, to immediately alert us and wait for our teams.