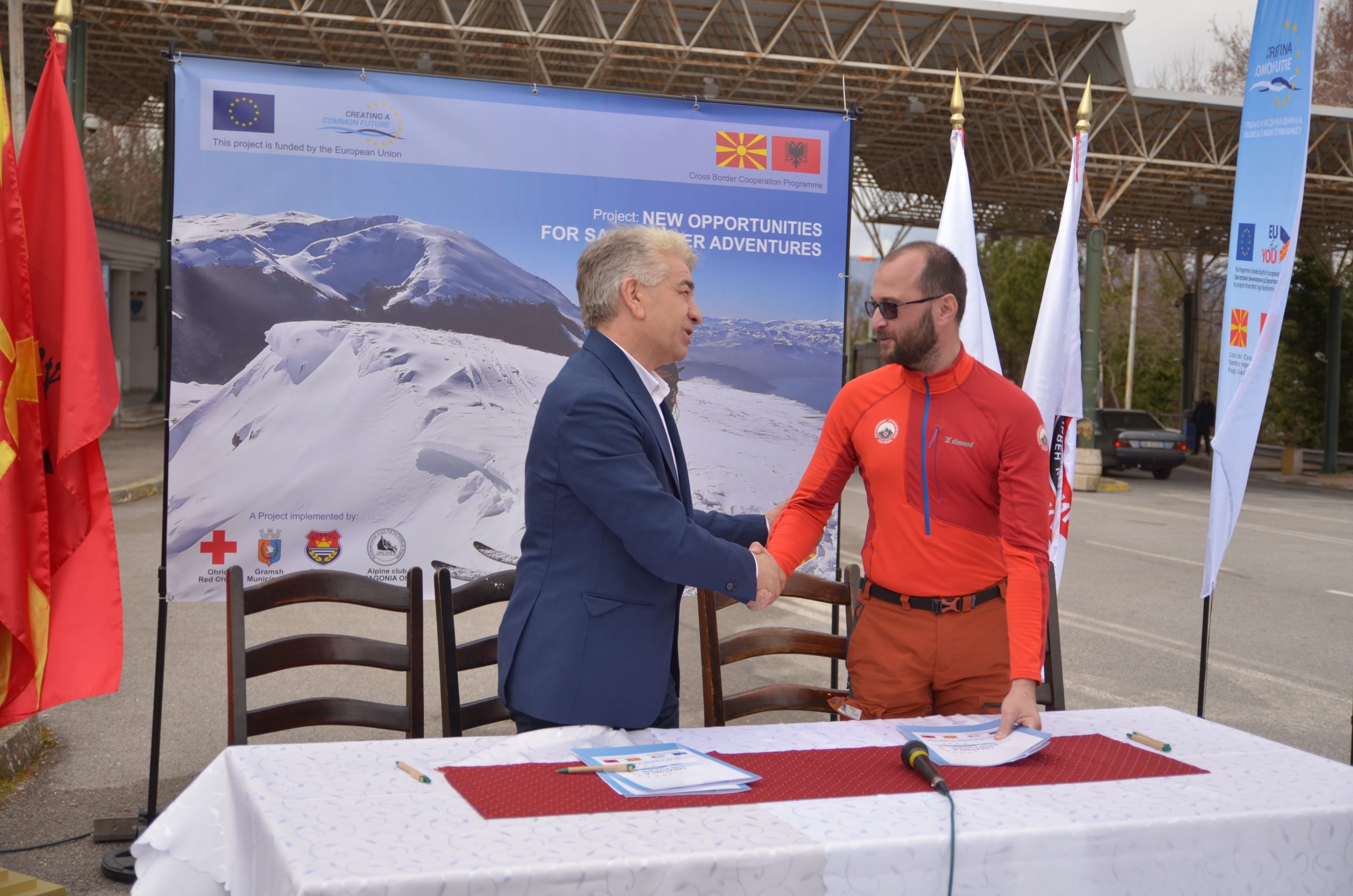 On February 12, 2020, on the border crossing Saint Naum a promotion of the project “New Opportunities for Safe Winter Adventure Tourism” was held. This project is funded by the European Union, through the Cross-border Cooperation Program with the Republic of Albania. Partners of this project, in addition to the Ohrid Red Cross MRS, are also the Alpine Club Patagonija Ohrid, Debrca municipality and the municipality of Gramsh, Albania. The main goal of the Project is to further promote the socio-economic development of the wider Ohrid-Prespa cross border region through sustainable tourism development and promotion of high safety standards in tourism. For the Mountain Rescue Service, this project will provide complete equipment for the safe operation of rescuers in winter conditions, as well as special off-road vehicles equipped with caterpillars and trailers for the transport of injured people in snowy conditions. This equipment will significantly improve the capacity of the Service as well as its efficiency in the winter.
At the ceremony, the Ohrid Red Cross Mountain Rescue Service and the National Coordination Center for Border Management signed a Memorandum for cooperation, aimed at coordinating the operation of the rescue service team so that they can cross the border as quickly as possible and intervene to rescue as soon as possible on the Albanian territory. This memorandum is the first step in the process of creating a special protocol, which will in the future enable the Mountain Rescue Service, with all its equipment, vehicles and rescuers, to cross the border at official border crossings or so-called green crossings without interruption, but also by helicopter if necessary for the effectiveness of the action. This means a systematic improvement of the security conditions in tourism, as well as greater security of the population of the cross-border region.
Mr. Sasho Tockov, President of the Ohrid Red Cross noted that the establishment of a system for efficient operation of the Mountain Rescue Service and the launch of the new project will complete the long-standing commitment to the security system and conditions for all tourists, lovers of the mountain, as well as for the mountain lovers and all residents of this region.
Mr. Nicola Bertolini from the EU Delegation for Cooperation and Development, for his part, pointed out that the European Union has always recognized and will support in the future all projects promoting cross-border cooperation as one of the most important priorities under EU support programs.

The Minister of Local Self-Government, Mr. Goran Milevski, the Director of the Customs Administration, Mr. Gjoko Tanasoski, as well as the mayors of the municipalities of Debrca and Gramsh, Mr. Zoran Nogacevski and Mr. Klodian Taçe, expressed their satisfaction for such successful projects, which affect not only the economic development of the region but also contribute to the promotion of tourism potentials of the municipalities.

Following the promotion, an initial workshop was organized at the St. Naum Hotel, with representatives of relevant institutions from both countries.